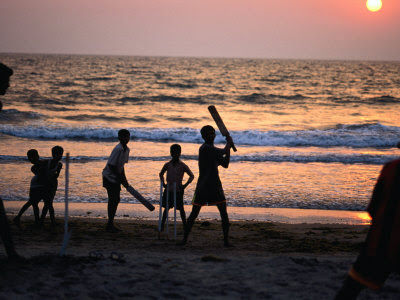 Sammy ambling to bowl 120 Km/h dollies and Ravi Rampaul sharing the new ball with Roach. Barath and Simmons gettting bogged down against a substandard Indian bowling attack on a lifeless pitch. Whats wrong with this picture. The West Indies i knew believed in dominating the opponent. Intimidating him. Out of the field they were nice guys but once on the field they were bullies. The bowlers never sledged because they dont have too. No batsman would dare to anger the likes of Marshel,Garner,Walsh,Ambrose, Bishop etc. Lara's magic was as much joy to behold as was Richard's nonchalant disdainful destruction of bowlers. Current WI team is a shame on the great teams of past. They don't have many talented player and the ones they have are being kept away form the game due to shoddy politics. Its a shame to see WICB going down the PCB road. Another nation with great cricketing culture is heading for disaster in terms of cricket. Other sports have surpassed cricket as popularity there. Its gonna take more than a ridiculous Chris Gayle afro to bring back the passion and love for cricket.
Posted by Angry Pixel at 9:12 AM